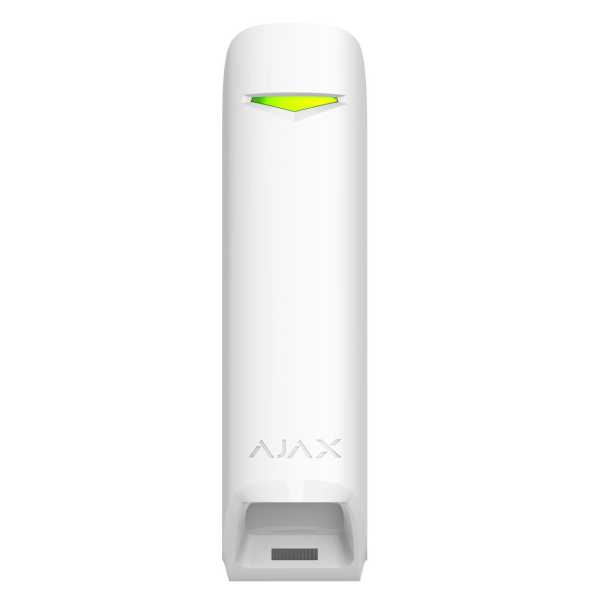 Detects every threat in time

MotionProtect Curtain - Motion detector with long range and small protective screen. The curtain motion detector provides effective protection against intruders and reacts as soon as an intruder enters the protected area. Can be used outdoors and indoors.

MotionProtect Curtain prevents intruders from entering your backyard unnoticed. If a burglar tries to climb over the fence, the detector triggers an alarm. At the same time, your family and pets can move freely around the grounds.

It is important to recognise the possibility of a break-in as soon as possible. The MotionProtect Curtain detector does not allow burglars to approach doors or windows or enter a terrace unnoticed, even if the area is not fenced.

Burglars often enter apartments on the ground floor and first floor via windows and balconies. The MotionProtect Curtain detector attached to the façade triggers an alarm before the thief enters the building.

Indoors, MotionProtect Curtain can be installed horizontally, upside down or in an inclined position. The sensor monitors all access routes around the clock without reacting to people in the building.

In buildings where the curtain motion detector is installed, you can move freely. However, if you reach for the protected object, an alarm is triggered.

As part of the development of the MotionProtect Curtain, we designed an optical system consisting of two infrared sensors and a segmented mirror. With this system, the detector can record and provide twice the amount of information about events in the protected zone as normal curtain detectors. It can reliably determine whether a hot air stream, moving leaves, an animal or actually an intruder is the cause of the trigger and only responds to real threats.

Detects even the most sophisticated intruders It does not matter whether the intruder moves quickly or slowly. As soon as it is in the field of vision of MotionProtect Curtain, the detector receives signals from two PIR sensors, compares them and immediately warns of any attacks.

When cats or dogs enter the protected zone, the detector performs a digital cross correlation of the signals. MotionProtect Curtain can distinguish between humans and animals and filter out false alarms.

The anti-masking system ensures that MotionProtect Curtain works perfectly day and night. If the detector's lens is blocked, painted over, sprayed over or taped over, the device sends an alarm signal.

After a few touches in the app, MotionProtect Curtain is connected to the safety system: Scan the QR code, add the detector to the room and continue the installation.

Was macht die AJAX-Geräte so speziell?