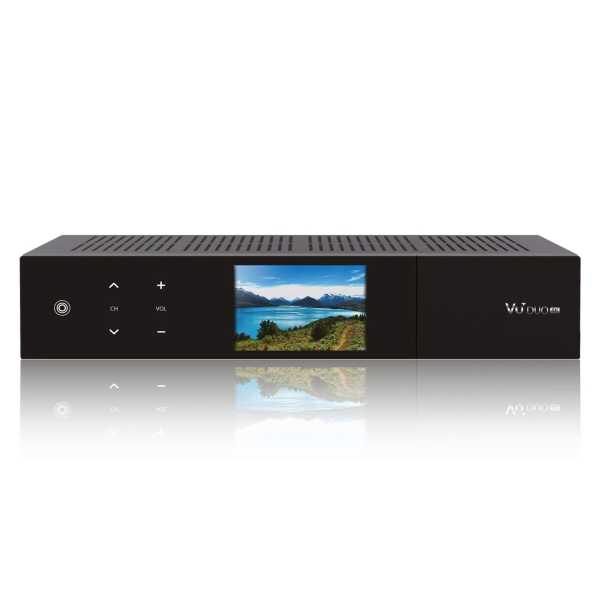 Technical data & hardware of the VU + Duo 4K
Under the hood of the new VU + 4K receiver is a 64-bit ARM QuadCore processor (clocking: 4x2100 MHz), 4 gigabytes of eMMC flash memory and 2 gigabytes of RAM, providing the VU + 4K box with enough power for your high-resolution 4K / UHD content fuel. Smooth playback and lightning-fast switching times are guaranteed with the VU + Duo 4K.

Intuitive and user-friendly operation thanks to Chromium OS
The operating system is the VU + Duo 4K's intuitive and easy-to-use Chromium OS from Google. This can be extended and adjusted via free apps and plug-ins. With it, you can easily and quickly expand the entertainment and functions of the 4K receiver from VU + and change the appearance of the user interfaces and multilingual menus with the help of skins. In addition, the VU + Duo 4K has many other useful features and functions ex works. Thus, for example, the WebKit browser and free, compatible to the receiver apps for iOS & Android.

VU + Duo 4K: Further functions and features of the UHD receiver
The VU + Duo 4K supports HbbTV, dual HD transcoding and the simultaneous decryption of 2 CI modules as well as typical receiver features. This gives you an unlimited channel list for your TV and radio programs, an EPG (electronic program guide), bouquet list support and the ability to automatically or manually search for channels. DiSEqC 1.0 / 1.1 / 1.2, USALS compatible is the VU + Duo 4K as well.

In order to protect your bandwidth, despite the compute-intensive processes and high data volumes that are typical of playing 4K content, the VU + Duo 4K encodes all video content via HEVC / H.265 and audio content via MPEG-1 & MPEG-2 Layer I and II, MP3.

Easy to integrate thanks to high connection and interface diversity
With the VU + Duo 4K, you get a receiver that, thanks to its numerous connection options, can be easily integrated into your system landscape and almost any TV rack. To connect the 4K box, for example either via the Gigabit Lan connection or the integrated dual-band WiFi interface with your network or the Internet. via the Bluetooth interface you can pair the receiver with with your speakers & soundbars, your smartphone, keyboards or even remote controls (like Vu + Bluetooth remote). Also noteworthy are the two simultaneous usable DVB CI slots of the VU + Duo 4K and the Xcrypt smart card reader. With the plug & play removable frame, you always have the option to change the hard disk or to install one. On the back of the VU + Duo 4K are two USB 3.0 ports and another USB (2.0) port on the side. Further interfaces are the RS232 interface and one HDMI 2.0 input or output as well as one S / PDIF output.