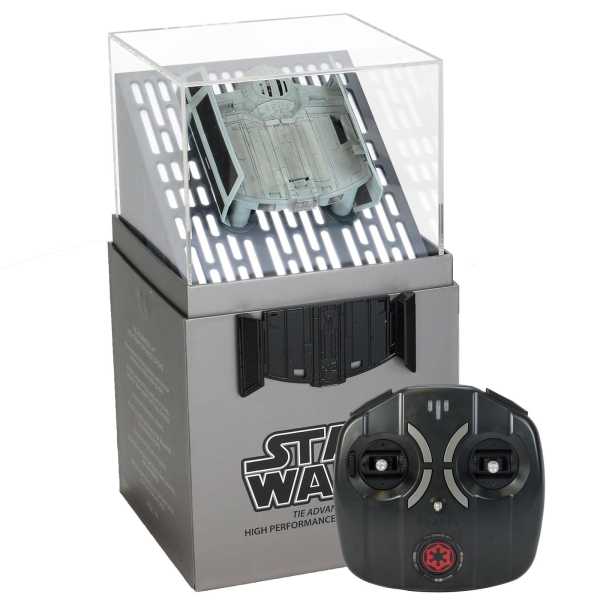 Description Evaluations 0
Description
Propel's Star Wars TIE Advanced X1 Battling Quadcopter Collector's Edition features a... more
Close menu
Propel's Star Wars TIE Advanced X1 Battling Quadcopter Collector's Edition features a hand-crafted, limited, super-agile and fast drone (up to 50km / h) with patented drivetrain. It is a very popular Star Wars fan article and gives you the unique opportunity to finally fly a spaceship of the TIE series, instead of just watching. The TIE Advanced X1 Battling Quadcopter is modeled after the Empire from the Star Wars film series and is roughly equivalent to the Fighter of Darth Vader, dark Sith Lord and father of Luke Skywalker. With the included remote control, the free app and the infrared battling system, you can compete with up to 12 friends in epic aerial battles - like before the destruction of the Death Star by Luke Skywalker or during the battle on the ice planet Hoth. The controller reacts with corresponding vibrations and original sounds and the quadcopter lands automatically on the third hit. If you've won the battle for the galaxy for now, the Star Wars Drone by Propel can be kept in the high-quality and illuminated DeLuxe collector box with original sounds.

When you open the numbered and limited collector box from Propel, the Star Wars quadcopter will be illuminated under a Plexiglas shell and at the same time different, original sounds from the Star Wars films will be played according to the model. This alone makes the presentation of the TIE-Fighter drone a highlight. Whether Jedi or Sith, the Star Wars TIE Advanced X1 Battling Quadcopter is a must-have for any die-hard Star Wars fan. May the force be with you to get another model of this limited-edition collector's edition.