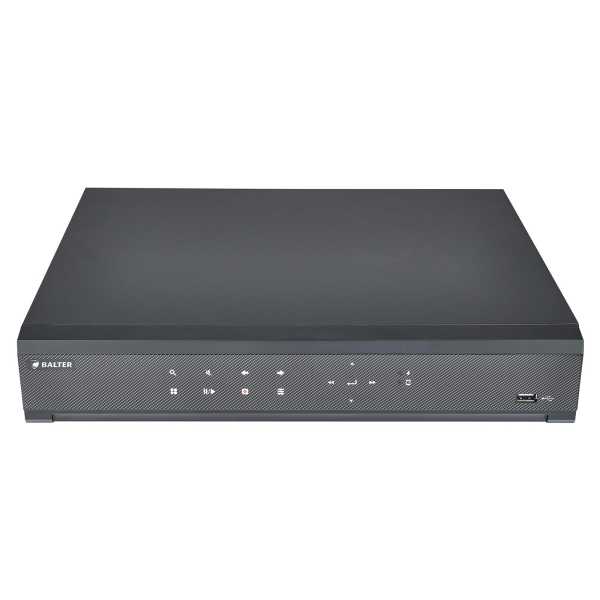 The 4-channel network video recorder BNR-3108P is the next step in the development of video surveillance. Up to 8 cameras take up at the same time with 4K UHD resolution - which is four times better than FullHD. With this incomparably high resolution of 3840 x 2160p image points, tiny details are now visible even in large areas, which would have been lost forever before.
Thanks to the integrated PoE inputs, a single cable per camera is sufficient to simultaneously transfer videos to the recorder and provide the camera with Storm.
The recorder automatically detects all connected Onvif and Balter cameras. Balter cameras can be configured directly at the recorder. Since 4 hard drives are supported up to 8TB, you can record continuously for weeks without impacting the hard disk drive.
The free Balter iSmartVideo app brings video surveillance with unmatched ease to your mobile device. Simply scan the QR code that is attached to your recorder, and you can control your cameras or stream recorded recordings in crisp resolution to your iOS or Android device.
With the Cloud feature, you can not miss an event, because the BNR-BNR-3108P is easy to connect to your Dropbox account and keeps you up-to-date with regularly uploaded images.
To stay informed, you can receive push messages on your smartphone as soon as a movement, alarm, or other event occurs. Select the events you want to be notified about, for example movements after 5 pm, and you will receive an e-mail including the picture if such an event occurs. This way you always know what is happening on your site, but you are not distracted by false alarms.
The new multi-function timeline presents you with the most important events of the day even faster. The search for intelligent video analysis events works with your Balter IP cameras, and monitors autonomously from you fixed areas or even individual objects. If you enter or leave a defined area, or move an object, the system registers this and notifies you, if desired. Movements outside the range of interest are ignored and false alarms are effectively prevented.

4 times better than FullHD
The BNR-BNR-3108P simultaneously records on all channels in 4K UHD - which is 4 times better than FullHD. With this pioneering high resolution, you will see details that would be lost forever in lesser quality. Discover even the most minute details, such as individual faces and markings, in huge amounts of human beings and ensure the full monitoring of large areas.

8 POE camera inputs - cable management was yesterday
Power over Ethernet saves time, money and nerves when setting up a surveillance system, because now a single cable per camera is enough to simultaneously transfer videos to the recorder and power the camera. Enjoy the ultimate in camera placement and ease the maintenance of your system by eliminating additional sources of error.

H.265 - Save more videos
The advanced H-265 Codec sets new standards in efficiency and image quality, as it increases your storage space by 50%: Compared to its predecessor, videos now occupy less than half the storage space. And with even better picture quality! Recordings remain incredibly sharp even after the compression and no more disturbing image artifacts.